Welcome! If you enjoy this post, please consider giving it a share and letting me know in the comments! Also...in case we are not already virtual buddies, I would LOVE for you to follow me on Pinterest, Twitter, Insta or Facebook! P.S. This post may contain affiliate links, which helps me run FlipFlopSocial. I appreciate all of your support! Check out my full disclosure here.

Welcome! If you enjoy this post, please consider giving it a share and letting me know in the comments! Also...in case we are not already virtual buddies, I would LOVE for you to follow me on Pinterest, Twitter, Insta or Facebook! P.S. This post may contain affiliate links, which helps me run FlipFlopSocial. I appreciate all of your support! Check out my full disclosure here. 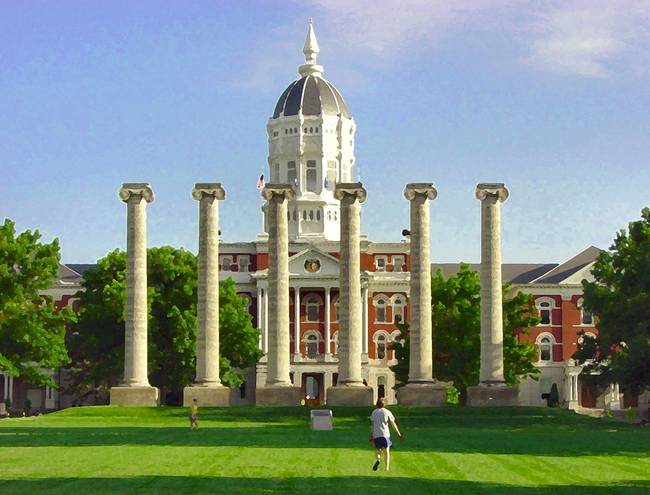 I will be excited to add my name to the University of Missouri list of alumni.

And by, just… I really do mean…’just.’ About 8 hours ago, I submitted a painstaking paper that seemed to be all over with nothing more than a very anti-climactic tap of the ‘enter’ button leading to a successful submission. I would have posted this sooner, but I took a nap…

And then had some family time…

But, this wasn’t just graduate school. I am not a 23 year-old single gal who went right into a Master’s program after undergrad. And before reading on, I think it’s important that I recognize and commend those students.

Graduate school is hard enough, so by no means am I trying to say it is easy for them. I know it’s not.

But…I have had a few added layers of responsibility during my time. I am a full-time working mother…with a business on the side. I work full time as a school counselor with a seven and five year old at home. Every educator will tell you that the job takes more than forty hours…even with summers off… but let’s not get into that argument.

I have had weeks of twelve hour days, not to mention the emotional exhaustion of student after student battling mental trauma. However, I am a private school counselor and knew I needed to complete my Master’s degree to be fully qualified. So, I did.

But that’s not the point of this. Don’t applaud me. Frankly, it wasn’t that hard. But, only because of one reason. The one you need to be applauding is…

You read that right. Him.

In recent months and years, we have seen an emergence of women’s rights and redefining how we should raise our boys to treat women.

And I think that’s great.

Actually, I am all for it.

I think of my great grandmothers who had to fight to be heard and it is not lost on me that I can have not just one…but two…degrees.

I also realize that, sadly, I have and oftentimes will still have to prove myself more than a man in the workplace. I get that.

In fact, this degree was an effort to prove something. Not so much to others… more to myself. I am a shameless dreamer who refuses to believe that I have ‘peaked.’ The best is yet to come…and all that jazz.

No. This post is about recognizing a man who grew up in the 80’s and still managed to learn how to treat a woman with respect and equality ( Shoutout to his parents, by the way).

A man who was humble enough to do dishes, take care of laundry and make sure his family is fed ( and not just with finances…but by, legit, slaving over a hot stove to cook…fed).

And I am woman enough to say that I absolutely could not have done this without him.

For the past two and a half years, he has had zero expectation for me to do dishes, cook or do laundry. He has patiently waited on the sideline as the clean clothes in the laundry basket spent weeks waiting to be put in a drawer. He knew my mind was on tasks elsewhere… and also that I hate putting away laundry.

I almost feel guilty admitting it. PSA to the world: I am not a domestic goddess. I will give you a moment to get over the shock.

Any time I say I run a blog, work and went to school. They ask how do you ever do it.

He’s amazing and super sweet…and awesome. But, I am not even writing this to just gush on him (though he deserves it and I want to).

It’s to recognize that I know there are others like him.

And they get a bad rap.

We put men down and fill the press with stories of the racists, bigots and abusers. But, we need to be reminded that there are good men out there. Men who are doing this thing right.

So, cheers to the house-husbands. Cheers to the guys that fold sheets better than we do, take our pictures for the insta and are not afraid of cleaning up kid’s puke.

Cheers to the dudes who carry pink princess backpacks at Disney, massage their wives feet and are willing to risk looking ‘unmanly….’ in order to be a man.

But here’s the deal, ladies, we don’t need them to be that man all the time.

No. We also kinda like it when they tell the other dudes to back off or give that “eye.”

Not gonna lie… I love the smell of my husband after he has been cooking meat on the smoker for hours.

We also want them to be tough and to be able to make hard decisions.

They have a fine line to balance just like we do.

You see, at the end of the day, I hate the men vs. women war we have waged as a society. Doesn’t it take all of us…giving and taking appropriately… to make this work?

Men… don’t be pigs. Take out the vacuum and tell your wife you think she is smart…not just sexy. (In fact… tell your daughter she is smart, too, and can go into Engineering while you’re at it…)

Ladies… don’t treat men like you are superior to them because you have something to prove. Say ‘thank you’ and be willing to step back and show them some honor, as well. If he forgets the box of chocolates on Valentine’s day…go get yourself a Twix and share with him. Let him go golfing or play poker with his bros. I promise any man worth his salt will repay the consideration. It’s psychology.

If we all give and take…trust will develop… respect will grow… and then, guess what…you both can accomplish something. Plus, your boys and girls are watching…

Ladies, if you don’t have a man like that… know that it’s possible. They do exist.

If you have a man like that… recognize him for who he is and make sure he knows it is appreciated.

I graduated. But, in reality…we graduated. I think what made the last three years work is the fact that it was never a me or him choice. This was something that “we” were doing.

It will always be my name on that way overpriced piece of paper. But, we did it together.

So, to him… and all of them like him… thank you.

10 Ways To Rock Being A Working Mom